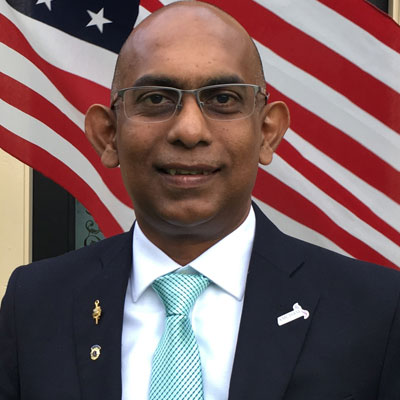 Mr. David Ramjohn, a citizen of Trinidad and Tobago, leads AlgEternal Technologies, LLC (AET), a company focused on the sustainable application of microalgae as an alternative to fossil hydrocarbons. He aligns AET with human needs for energy, environmental and economic benefits, pursuing sustainable economic activity while reducing dependence on petroleum hydrocarbons for non-fuel products. David has adopted the principles of “Conscious Capitalism”, operating AlgEternal in a manner that elevates all humanity.

Recognized by the United States Citizenship and Immigration Service as an “alien with extraordinary ability in science and business, sustainable development, and renewable resource management and applications (science)”, he holds a category O-1A visa1, reserved for individuals in the top of their respective fields. David holds a B.Sc. in Marine Biology and an M.Sc. in Environmental Studies (Policy and Law), with over 20 years’ experience in sustainable development and environmental and natural resource management. He won the 2004 Bishop Robert Smith Award from the College of Charleston in South Carolina, USA—the highest award given to any graduate of the College, and the 2002 Betty Spence Conservation Award from the South Carolina Wildlife Federation. David belongs to the Phi Kappa Phi Honor Society, the Golden Key Honor Society, and the National Society of Collegiate Scholars. He appeared in the 2004 edition of “Who’s Who in American Colleges and Universities” and was recently inducted into the 2019 Edition of “Marquis Who’s Who in America” and “Who’s Who Among Professionals”. David is a member of the Noon Lions Club and the Rotary Club of La Grange, Texas, USA and serves on the Board of Directors of both clubs. He is a member of the Algae Biomass Organization (ABO), serving on the ABO’s Algae Foundation Education and Communication Committees. He is a member of the Phycological Society of America.

Since June 2016, David has restructured AlgEternal into a vertically integrated producer of algaebased products. He has successfully brought the company to commercialization with its first two offerings: Agtivate™, a natural soil amendment containing a live polyculture of microalgae; and the AlgAllure™ AlgaRiche™ Skin Care Collection, containing AlgEternal’s proprietary ingredient, PhycoDerm™, extracted from marine red microalgae. David believes that humans must plan for a post-petroleum world and views microalgae and their applications as the natural successor to fossil hydrocarbons to sustainably provide non-fuel products and critical ecosystem services. David posits that harnessing the power of microalgae represents the single greatest opportunity for humans to ensure that planet Earth remains hospitable to our species—saving our place on the planet.

This website uses cookies to improve your experience while you navigate through the website. Out of these cookies, the cookies that are categorized as necessary are stored on your browser as they are as essential for the working of basic functionalities of the website. We also use third-party cookies that help us analyze and understand how you use this website. These cookies will be stored in your browser only with your consent. You also have the option to opt-out of these cookies. But opting out of some of these cookies may have an effect on your browsing experience.
Necessary Always Enabled
Necessary cookies are absolutely essential for the website to function properly. This category only includes cookies that ensures basic functionalities and security features of the website. These cookies do not store any personal information.
SAVE & ACCEPT
DECEMBER PROMO- 50% OFF ALL RETAIL ITEMS + FREE SHIPPING ON PURCHASES FROM $100 *EXCLUDES TRAVEL SET
+